Dwight Moody was born in Northfield, Massachusetts, as the seventh child in a large family. His father, Edwin J. Moody, was a small farmer and stonemason. His mother was Betsey Moody (née Holton. They had five sons and a daughter before Dwight’s birth. His father died when Dwight was age four; fraternal twins, a boy and a girl, were born one month after the father’s death. Their mother struggled to support the nine children, but had to send some off to work for their room and board. Dwight too was sent off, where he received cornmeal, porridge, and milk three times a day. He complained to his mother, but when she learned that he was getting all he wanted to eat, she sent him back. During this time, she continued to send the children to church. Together with his eight siblings, Dwight was raised in the Unitarian church. His oldest brother ran away and was not heard from by the family until many years later. 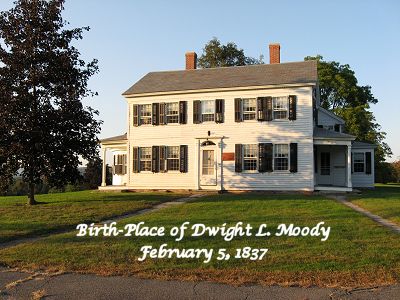 When Moody turned 17, he moved to Boston to work in an uncle’s shoe store. One of the uncle’s requirements was that Moody attend the Congregational Church of Mount Vernon, where Dr. Edward Norris Kirk served as the pastor. In April 1855 Moody was converted to evangelical Christianity when his Sunday school teacher, Edward Kimball, talked to him about how much God loved him. His conversion sparked the start of his career as an evangelist. Moody was not received by the church when he first applied in May 1855. He was not received as a church member until May 4, 1856. 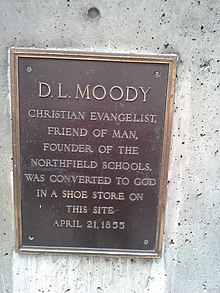 According to Moody’s memoir, his teacher, Edward Kimball, said:I can truly say, and in saying it I magnify the infinite grace of God as bestowed upon him, that I have seen few persons whose minds were spiritually darker than was his when he came into my Sunday School class; and I think that the committee of the Mount Vernon Church seldom met an applicant for membership more unlikely ever to become a Christian of clear and decided views of Gospel truth, still less to fill any extended sphere of public usefulness.

The first meeting I ever saw him at was in a little old shanty that had been abandoned by a saloon-keeper. Mr. Moody had got the place to hold the meetings in at night. I went there a little late; and the first thing I saw was a man standing up with a few tallow candles around him, holding a negro boy, and trying to read to him the story of the Prodigal Son and a great many words he could not read out, and had to skip. I thought, ‘If the Lord can ever use such an instrument as that for His honor and glory, it will astonish me. As a result of his tireless labor, within a year the average attendance at his school was 650, while 60 volunteers from various churches served as teachers. It became so well known that the just-elected President Lincoln visited and spoke at a Sunday School meeting on November 25, 1860.

In June 1871 at an International Sunday School Convention in Indianapolis, Indiana, Dwight Moody met Ira D. Sankey. He was a gospel singer, with whom Moody soon began to cooperate and collaborate. Four months later, in October 1871, the Great Chicago Fire destroyed Moody’s church building, as well as his house and those of most of his congregation. Many had to flee the flames, saving only their lives, and ending up completely destitute. Moody, reporting on the disaster, said about his own situation that: “… he saved nothing but his reputation and his Bible.”

In the years after the fire, Moody’s wealthy Chicago patron John V. Farwell tried to persuade him to make his permanent home in the city, offering to build a new house for Moody and his family. But the newly famous Moody, also sought by supporters in New York, Philadelphia, and elsewhere, chose a tranquil farm he had purchased near his birthplace in Northfield, Massachusetts. He felt he could better recover in a rural setting from his lengthy preaching trips.

Northfield became an important location in evangelical Christian history in the late 19th century as Moody organized summer conferences. These were led and attended by prominent Christian preachers and evangelists from around the world. Western Massachusetts has had a rich evangelical tradition including Jonathan Edwards preaching in colonial Northampton and C.I. Scofield preaching in Northfield.

Moody founded two schools here: Northfield School for Girls, founded in 1879, and the Mount Hermon School for Boys, founded in 1881. In the late 20th century, these merged, forming today’s co-educational, nondenominational Northfield Mount Hermon School.
During a trip to the United Kingdom in the spring of 1872, Moody became well known as an evangelist. Literary works published by the Moody Bible Institute claim that he was the greatest evangelist of the 19th century. He preached almost a hundred times and came into communion with the Plymouth Brethren. On several occasions, he filled stadia of a capacity of 2,000 to 4,000. According to his memoir, in the Botanic Gardens Palace, he attracted an audience estimated at between 15,000 and 30,000.

That turnout continued throughout 1874 and 1875, with crowds of thousands at all of his meetings. During his visit to Scotland, Moody was helped and encouraged by Andrew A. Bonar. The famous London Baptist preacher, Charles Spurgeon, invited him to speak, and he promoted the American as well. When Moody returned to the US, he was said to frequently attract crowds of 12,000 to 20,000 were as common as they had been in England. President Grant and some of his cabinet officials attended a Moody meeting on January 19, 1876. He held evangelistic meetings from Boston to New York, throughout New England, and as far west as San Francisco, also visiting other West Coast towns from Vancouver, British Columbia, Canada to San Diego.

Moody aided the work of cross-cultural evangelism by promoting “The Wordless Book,” a teaching tool developed in 1866 by Charles Spurgeon. In 1875, Moody added a fourth color to the design of the three-color evangelistic device: gold — to “represent heaven.” This “book” has been and is still used to teach uncounted thousands of illiterate people, young and old, around the globe about the gospel message.

Moody visited Britain with Ira D. Sankey, with Moody preaching and Sankey singing at meetings. Together they published books of Christian hymns. In 1883 they visited Edinburgh and raised £10,000 for the building of a new home for the Carrubbers Close Mission. Moody later preached at the laying of the foundation stone for what is now called the Carrubbers Christian Centre, one of the few buildings on the Royal Mile which continues to be used for its original purpose.

Moody greatly influenced the cause of cross-cultural Christian missions after he met Hudson Taylor, a pioneer missionary to China. He actively supported the China Inland Mission and encouraged many of his congregation to volunteer for service overseas.

He preached his last sermon on November 16, 1899, in Kansas City, Missouri. Becoming ill, he returned home by train to Northfield. During the preceding several months, friends had observed he had added some 30 pounds (14 kg) to his already ample frame. Although his illness was never diagnosed, it has been speculated that he suffered from congestive heart failure. He died on December 22, 1899, surrounded by his family. Already installed as the leader of his Chicago Bible Institute. R. A. Torrey succeeded Moody as its president.