Elisabeth Elliot was born Elisabeth Howard in Brussels, Belgium on December 21, 1926, and her family included her missionary parents, four brothers, and one sister. Elisabeth’s brothers, Thomas Howard and David Howard, are also authors.

Her family moved to the Germantown neighborhood of Philadelphia, Pennsylvania in the U.S. when she was a few months old. In addition to Philadelphia, she lived in Franconia, New Hampshire and Moorestown, New Jersey. She studied Classical Greek at Wheaton College, believing that it was the best tool to help her with the calling of ultimately translating the New Testament of the Bible into an unknown language. It was at Wheaton where she met Jim Elliot. Before their marriage, Elisabeth took a post-graduate year of specialized studies at Prairie Bible Institute in Alberta, Canada, where a campus prayer chapel was later named in her honour. Jim Elliot and Elisabeth Howard went individually to Ecuador to work with the Quichua (or Quechua) Indians; the two married in 1953 in the city of Quito, Ecuador. In January 1956, her husband Jim was speared to death along with four of his missionary friends while attempting to contact the Huaorani tribe. Their daughter, Valerie (born February 27, 1955), was 10 months old when her father was killed. Elisabeth continued her work with the Quechua for two more years. Two Huaorani women living among the Quichua, including one named Dayuma, taught the Huao language to Mrs. Elliot and fellow missionary Rachel Saint. When Dayuma returned to the Huaorani, she created an opening for contact by the missionaries. In October 1958, Mrs. Elliot went to live with the Huaorani with her three-year-old daughter Valerie and with Rachel Saint.

The Auca/Huaorani gave Elisabeth the tribal name Gikari, Huao for “Woodpecker.” She later returned to the Quichua and worked with them until 1963, when she and Valerie returned to the US (Franconia, New Hampshire).

In 1969, Elisabeth married Addison Leitch, professor of theology at Gordon-Conwell Theological Seminary in South Hamilton, Massachusetts. Leitch died in 1973. In the fall of 1974, she became an adjunct professor on the faculty of Gordon-Conwell Theological Seminary and for several years taught a popular course entitled “Christian Expression.” In 1977, she married Lars Gren, a hospital chaplain. The Grens later worked and travelled together. 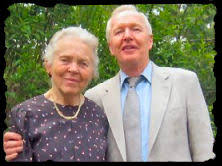 In the mid-1970s, she served as one of the stylistic consultants for the committee of the New International Version of the Bible (NIV). She appears on the NIV’s list of contributors.

In 1981, Mrs. Gren was appointed writer-in-residence at Gordon College in Wenham, MA.

From 1988 to 2001, Elisabeth could be heard on a daily radio program, Gateway to Joy, produced by the Good News Broadcasting Association of Lincoln, Nebraska. She almost always opened the program with the phrase, “‘You are loved with an everlasting love,’ – that’s what the Bible says – ‘and underneath are the everlasting arms.’ This is your friend, Elisabeth Elliot…”Today re-runs of the program may be heard over the Bible Broadcasting Network.

In her later years, she and her husband stopped travelling, but continued to keep in touch with the public through mail and their website.

Elisabeth Elliot died in Magnolia, Massachusetts on June 15, 2015, at the age of 88. Shortly after her death, Steve Saint, the son of one of the other missionaries who were killed alongside Elliot’s first husband, Jim, posted on Facebook about her final victory over “the loss of her mind to dementia” and “her ten year battle with the disease which robbed her of her greatest gift.” She was interred at Hamilton Cemetery in Hamilton, Massachusetts. She was survived by her third husband, Lars Gren, a daughter, Valerie Elliot Shepard and husband Walter, and eight grandchildren.

A Chance to Die – Life and Legacy of Amy Carmichael

‘What Mincaye and his tribesmen meant for evil, God used for good’ Mincaye Enquedi: 1930–2020