Desiderius Erasmus Roterodamus; 28 October 1466 – 12 July 1536), known as Erasmus or Erasmus of Rotterdam, was a Dutch Christian humanist who was the greatest scholar of the northern Renaissance. Originally trained as a Catholic priest, Erasmus was an important figure in classical scholarship who wrote in a pure Latin style. 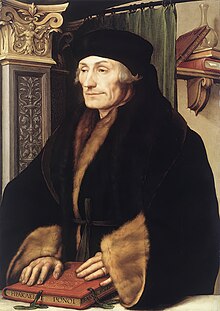 Among humanists he enjoyed the sobriquet “Prince of the Humanists”, and has been called “the crowning glory of the Christian humanists”. Using humanist techniques for working on texts, he prepared important new Latin and Greek editions of the New Testament, which raised questions that would be influential in the Protestant Reformation and Catholic Counter-Reformation. He also wrote On Free Will, In Praise of Folly, Handbook of a Christian Knight, On Civility in Children, Copia: Foundations of the Abundant Style, Julius Exclusus, and many other works.

Erasmus lived against the backdrop of the growing European religious Reformation, but while he was critical of the abuses within the Catholic Church and called for reform, he kept his distance from Luther, Henry VIII and John Calvin and continued to recognise the authority of the pope, emphasizing a middle way with a deep respect for traditional faith, piety and grace, rejecting Luther’s emphasis on faith alone. Erasmus remained a member of the Roman Catholic Church all his life, remaining committed to reforming the church and its clerics’ abuses from within. He also held to the Catholic doctrine of free will, which some Reformers rejected in favor of the doctrine of predestination. His middle-road approach disappointed, and even angered, scholars in both camps.

Erasmus died suddenly in Basel in 1536 while preparing to return to Brabant, and was buried in Basel Minster, the former cathedral of the city. A bronze statue of Erasmus was erected in 1622 in his city of birth, replacing an earlier work in stone.

Give light, and the darkness will disappear of itself.