James Hudson Taylor was a British Protestant Christian missionary to China and founder of the China Inland Mission (CIM, now OMF International). Taylor spent 51 years in China. The society that he began was responsible for bringing over 800 missionaries to the country who began 125 schools and directly resulted in 18,000 Christian conversions, as well as the establishment of more than 300 stations of work with more than 500 local helpers in all eighteen provinces. 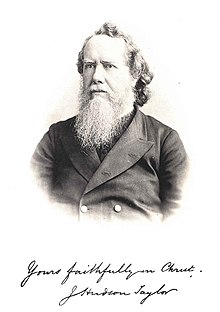 Taylor was known for his sensitivity to Chinese culture and zeal for evangelism. He adopted wearing native Chinese clothing even though this was rare among missionaries of that time. Under his leadership, the CIM was singularly non-denominational in practice and accepted members from all Protestant groups, including individuals from the working class, and single women as well as multinational recruits. Primarily because of the CIM’s campaign against the opium trade, Taylor has been referred to as one of the most significant Europeans to visit China in the 19th century. Historian Ruth Tucker summarizes the theme of his life:

No other missionary in the nineteen centuries since the Apostle Paul has had a wider vision and has carried out a more systematized plan of evangelizing a broad geographical area than Hudson Taylor.

Taylor was able to preach in several varieties of Chinese, including Mandarin, Chaozhou, and the Wu dialects of Shanghai and Ningbo. The last of these he knew well enough to help prepare a colloquial edition of the New Testament written in it.

Praying for the World: Understanding God’s Heart for the Nations