Foxe was born in Boston, in Lincolnshire, England, into a prominent family and seems to have been an unusually studious and devout child. In about 1534, when he was about sixteen, he entered Brasenose College, Oxford, where he was the pupil of John Hawarden (or Harding), a fellow of the college. In 1535 Foxe was admitted to Magdalen College School, where he may either have been improving his Latin or acting as a junior instructor. He became a probationer fellow in July 1538 and a full fellow the following July.

Foxe took his bachelor’s degree on 17 July 1537, his master’s degree in July 1543, and was lecturer in logic in 1539–40. A series of letters in Foxe’s handwriting dated to 1544–45, shows Foxe to be “a man of friendly disposition and warm sympathies, deeply religious, an ardent student, zealous in making acquaintance with scholars.”  By the time he was twenty-five, he had read the Latin and Greek fathers, the schoolmen, the canon law, and had “acquired no mean skill in the Hebrew language.”

Foxe resigned from his college in 1545 after becoming a Protestant and thereby subscribing to beliefs condemned by the Church of England under Henry VIII.  After a year of “obligatory regency” (public lecturing), Foxe would have been obliged to take holy orders by Michaelmas 1545, and the primary reason for his resignation was probably his opposition to clerical celibacy. Foxe may have been forced from the college in a general purge of its Protestant members although college records state that he resigned of his own accord and “ex honesta causa”.  Foxe’s change of religious opinion may have temporarily broken his relationship with his stepfather and even have put his life in danger. Foxe personally witnessed the burning of William Cowbridge in September 1538.

After being forced to abandon what might have been a promising academic career, Foxe experienced a period of dire need. Hugh Latimer invited Foxe to live with him, but Foxe eventually became a tutor in the household of Thomas Lucy of Charlecote, near Stratford-on-Avon. Before leaving the Lucys, Foxe married Agnes Randall on 3 February 1547.  They had six children. 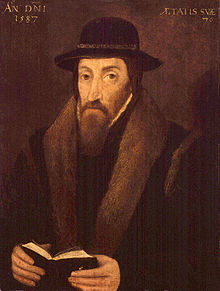 Foxe’s prospects, and those of the Protestant cause generally, improved after the accession of Edward VI in January 1547 and the formation of a Privy Council dominated by pro-reform Protestants. In the middle of or at the end of 1547, Foxe moved to London and probably lived in Stepney. There he completed three translations of Protestant sermons published by the “stout Protestant” Hugh Singleton. During this period Foxe also found a patron in Mary Fitzroy, Duchess of Richmond, who hired him as tutor to the orphan children of her brother, Henry Howard, Earl of Surrey, a Catholic who had been executed for treason in January 1547. (The children were Thomas, who would become the fourth duke of Norfolk and a valuable friend of Foxe; Jane, later Countess of Westmorland; Henry, later earl of Northampton; and their cousin Charles, who would later command the English fleet against the Spanish Armada.) Foxe lived in the Duchess’s London household at Mountjoy House and later at Reigate Castle, and her patronage “facilitated Foxe’s entry into the ranks of England’s Protestant elite.” During his stay at Reigate, Foxe helped suppress a cult that had arisen around the shrine of the Virgin Mary at Ouldsworth, which had been credited with miraculous healing powers.

Foxe was ordained deacon by Nicholas Ridley on 24 June 1550. His circle of friends, associates, and supporters came to include John Hooper, William Turner, John Rogers, William Cecil, and most importantly John Bale, who was to become a close friend and “certainly encouraged, very probably guided, Foxe in the composition of his first martyrology.” From 1548 to 1551, Foxe brought out one tract opposing the death penalty for adultery and another supporting ecclesiastical excommunication of those who he thought “veiled ambition under the cloak of Protestantism.”

On the accession of Mary I in July 1553, Foxe lost his tutorship when the children’s grandfather, the Duke of Norfolk was released from prison. Foxe walked warily as befitted one who had published Protestant books in his own name. As the political climate worsened, Foxe believed himself personally threatened by Bishop Stephen Gardiner. Just ahead of officers sent to arrest him, he sailed with his pregnant wife from Ipswich to Nieuwpoort. He then travelled to Antwerp, Rotterdam, Frankfurt and Strasbourg, which he reached by July 1554. In Strasbourg, Foxe published a Latin history of the Christian persecutions, the draught of which he had brought from England and “which became the first shadowy draught of his Acts and Monuments.”

In the autumn of 1554, Foxe moved to Frankfurt, where he served as a preacher for the English church ministering to refugees in the city. There he was unwillingly drawn into a bitter theological controversy. One faction favoured the church polity and liturgy of the Book of Common Prayer, while the other advocated the Reformed models promoted by John Calvin’s Genevan church. The latter group, led by John Knox, was supported by Foxe; the former was led by Richard Cox. Eventually Knox, who seems to have acted with more magnanimity, was expelled, and in the fall of 1555, Foxe and about twenty others also left Frankfurt. and moved to Basel.

When Foxe received reports from England about the ongoing religious persecution there, he wrote a pamphlet urging the English nobility to use their influence with the queen to halt it. Foxe feared that the appeal would be useless, and his fears proved correct. 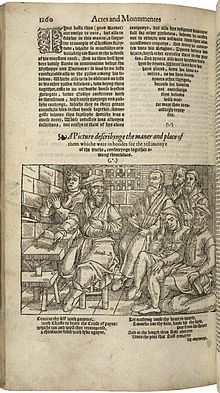 Foxe was ordained a priest by his friend Edmund Grindal, now Bishop of London, but he “was something of a puritan, and like many of the exiles, had scruples about wearing the clerical vestments laid down in the queen’s injunctions of 1559.” Many of his friends eventually conformed, but Foxe was “more stubborn or single-minded.” Some tried to find him preferments in the new regime, but it “was not easy to help a man of so singularly unworldly a nature, who scorned to use his powerful friendships to advance himself.”

Princes, kings, and other rulers of the world have used all their strength and cunning against the Church, yet it continues to endure and hold its own.