John Owen was an English Nonconformist church leader, theologian, and academic administrator at the University of Oxford.

In 1644, Owen married Mary Rooke (d. 1675). The couple had 11 children, ten of whom died in infancy. One daughter survived to adulthood, married, and shortly thereafter died of consumption. Eighteen months later, he married Dorothy D’Oyley, the wealthy widow of Thomas D’Oyley, a member of the landlords’ family at Stadhampton.

On 29 April he preached before the Long Parliament. In this sermon, and in his Country Essay for the Practice of Church Government, which he appended to it, his tendency to break away from Presbyterianism to the Independent or Congregational system is seen.

He became pastor at Coggeshall in Essex, with a large influx of Flemish tradesmen. His adoption of Congregational principles did not affect his theological position, and in 1647 he again argued against Arminianism in The Death of Death in the Death of Christ, which drew him into long debate with Richard Baxter. He was chosen to preach to parliament on the day after the execution of King Charles I. 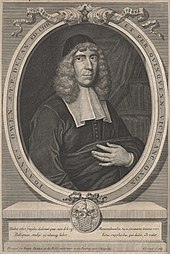 During his eight years of official Oxford life Owen showed himself a firm disciplinarian, thorough in his methods. Owen, unlike many of his contemporaries, was more interested in the New Testament than in the Old. During his Oxford years he wrote Justitia Divina (1653), an exposition of the dogma that God cannot forgive sin without an atonement; Communion with God (1657), Doctrine of the Saints’ Perseverance (1654), his final attack on Arminianism; Vindiciae Evangelicae, a treatise written by order of the Council of State against Socinianism as expounded by John Biddle; On the Mortification of Sin in Believers (1656), an introspective and analytic work; Schism (1657), one of the most readable of all his writings; Of Temptation (1658), an attempt to recall Puritanism to its cardinal spiritual attitude from the jarring anarchy of sectarianism and the pharisaism which had followed on popularity and threatened to destroy the early simplicity.
Besides his academic and literary concerns, Owen was continually involved in affairs of state. In 1651, on 24 October (after Worcester), he preached the thanksgiving sermon before parliament. In 1652 he sat on a council to consider the condition of Protestantism in Ireland. In October 1653 he was one of several ministers whom Cromwell summoned to a consultation as to church union. In December, the degree of Doctor of Divinity was conferred upon him by Oxford University. In the First Protectorate Parliament of 1654 he sat, for a short time, as the sole member of parliament for Oxford University, and, with Baxter, was placed on the committee for settling the “fundamentals” necessary for the toleration promised in the Instrument of Government. In the same year he was chairman of a committee on Scottish Church affairs. In 1658 he took a leading part in the conference of Independents which drew up the Savoy Declaration (the doctrinal standard of Congregationalism which was based upon the Westminster Confession of Faith).

On Oliver Cromwell’s death in 1658, Owen joined the Wallingford House party, and though he denied any share in the deposition of Richard Cromwell, he preferred the idea of a simple republic to that of a protectorate. He assisted in the restoration of the Rump Parliament, and, when George Monck began his march into England, Owen, in the name of the Independent churches, to which Monck was supposed to belong, and who were anxious about his intentions, wrote to dissuade him. In March 1660, the Presbyterian party being uppermost, Owen was deprived of his deanery, which was given back to Reynolds. He retired to Stadham, where he wrote various controversial and theological works, in particular his laborious Theologoumena Pantodapa, a history of the rise and progress of theology. The respect in which many of the authorities held his intellectual eminence won him an immunity denied to other Nonconformists. In 1661 the celebrated Fiat Lux, a work by the Franciscan friar John Vincent Cane, was published; in it, the oneness and beauty of Roman Catholicism are contrasted with the confusion and multiplicity of Protestant sects. At Clarendon’s request Owen answered this in 1662 in his Animadversions; and so great was the success of that work that he was offered preferment if he would conform. Owen’s condition was liberty to all who disagreed in doctrine with the Church of England; nothing therefore came of the negotiation.

In 1663, Owen was invited by the Congregational churches in Boston, Massachusetts, to become their minister, but declined. The Conventicle and Five Mile Acts drove him to London; and in 1666, after the Great Fire, he, like other leading Nonconformist ministers, set up a room for public service and gathered a congregation, composed chiefly of the old Commonwealth officers.

Meanwhile, Owen was incessantly writing; and in 1667 he published his Catechism, which led to a proposal, “more acute than diplomatic”, from Baxter for union. Various papers passed, and after a year the attempt was closed by the following laconical note from Owen: “I am still a well-wisher to these mathematics.” It was now, too, that he published the first part of his vast work upon the Epistle to the Hebrews, together with his Practical Exposition upon Psalm 130 (1668) and his searching book on Indwelling Sin.

In 1669, Owen wrote a spirited remonstrance to the Congregationalists in New England, who, under the influence of Presbyterianism, had shown themselves persecutors. At home, too, he was busy in the same cause.

When King Charles II issued his Declaration of Indulgence in 1672, Owen drew up an address of thanks; Owen was one of the first preachers at the weekly lectures which the Independents and Presbyterians jointly held at Princes’ Hall in Broad Street. He was respected by many of the nobility, and during 1674 both King Charles II and his brother King James II assured him of their good wishes to the dissenters. Charles gave him 1000 guineas to relieve those on whom the severe laws had pressed, and he was able to procure the release of John Bunyan, whose preaching he admired. In 1674 Owen was attacked by William Sherlock, Dean of St Paul’s. From this time until 1680, he was engaged on his ministry and writing.

Later life
The chief of these were On Apostasy (1676), a sad account of religion under the Restoration; On the Holy Spirit (1677–1678) and The Doctrine of Justification (1677). In 1680, however, Stillingfleet having on 11 May preached his sermon on “The Mischief of Separation,” Owen defended the Nonconformists from the charge of schism in his Brief Vindication. Baxter and Howe also answered Stillingfleet, who replied in The Unreasonableness of Separation. Owen again answered this, and then left the controversy to a swarm of eager combatants. From this time to his death he was occupied with continual writing, disturbed only by suffering from kidney stones and asthma, and by the absurd charge of being concerned in the Rye House Plot. His most important work was his Treatise on Evangelical Churches, in which were contained his latest views regarding church government. He died at Ealing, just twenty-one years after he had gone out with so many others on St Bartholomew’s day in 1662, and was buried on 4 September 1683 in Bunhill Fields.

An Introduction to John Owen: A Christian vision for every stage of life

The Trinitarian Devotion of John Owen

"There is no death of sin without the death of Christ." "When He took on Him the form of a servant in our nature, He became what He had never been before, but He did not cease to be what He always had been in His divine nature. He who is God cannot ever cease to be God."