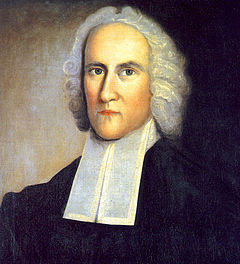 Jonathan Edwards (October 5, 1703 – March 22, 1758) was an American revivalist preacher, philosopher, and Congregationalist Protestant theologian. Like most of the Puritans, he held to the Reformed theology. His colonial followers later distinguished themselves from other Congregationalists as “New Lights” (endorsing the Great Awakening), as opposed to “Old Lights” (non-revivalists). Edwards is widely regarded as “one of America’s most important and 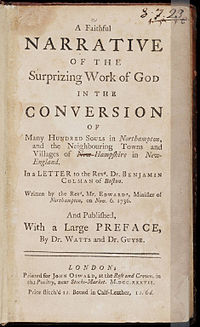 original philosophical theologians”. Edwards’ theological work is broad in scope, but he was rooted in Reformed theology, the metaphysics of theological determinism, and the Puritan heritage. Recent studies have emphasized how thoroughly Edwards grounded his life’s work on conceptions of beauty, harmony, and ethical fittingness, and how central The Enlightenment was to his mindset. Edwards played a critical role in shaping the First Great Awakening, and oversaw some of the first revivals in 1733–35 at his church in Northampton, Massachusetts.

Edwards delivered the sermon “Sinners in the Hands of an Angry God”, a classic of early American literature, during another revival in 1741, following George Whitefield’s tour of the Thirteen Colonies. Edwards is well known for his many books, The End For Which God Created the World,

The Life of David Brainerd, which inspired thousands of missionaries throughout the 19th century, and Religious Affections, which many Reformed Evangelicals still read today. Edwards died from a smallpox inoculation shortly after beginning the presidency at the College of New Jersey (Princeton). He was the grandfather of Aaron Burr, third Vice President of the United States.

A monument in Enfield, Connecticut,commemorating the location where this sermon was preached.

Jonathan Edwards: missionary to the Indians

Evangelical Spirituality – Sarah Edwards and the vision of God

Evangelical Spirituality – Captivated by the Beauty of God

A Reader’s Guide to the Major Writings of Jonathan Edwards (Ed Nathan A. Finn and Jeremy M. Kimble

Jonathan Edwards and the Psalms

The Preaching of Jonathan Edwards

The God-Centred Life: Insights from Jonathan Edwards for today

Grace is but glory begun, and glory is but grace perfected. The enjoyment of God is the only happiness with which our souls can be satisfied. A true and faithful Christian does not make holy living an accidental thing. It is his great concern. As the business of the soldier is to fight, so the business of the Christian is to be like Christ.

The quiet revival in the Faroes