A spotless bride – the holiness of the church

A spotless bride — the holiness of the church

Institutions are in trouble these days and professionals are suspect. The political, legal, financial, educational and even charitable realms of the western world are crumbling. A lack of moral integrity is at the core of this disintegration.

This is sad to admit, but it is true — and not only the ‘have-nots’ and the cynics acknowledge it. Those who ought to be most protective of an institution’s good name and traditions often seem to be the most indifferent to them.
Intoxicated by prestige and power, they squander their own credibility and the resources of the institutions they represent. Consequently, ordinary people feel disappointed and betrayed. Many of them are soured, lonely and despairing.
But isn’t there another world, so to speak — a world of peace, joy and righteousness? Yes there is, in heaven. And heaven has a colony — an outpost — here on earth in the church, the current home of God’s people. Yet to many people this other world seems nonexistent, partly because the church on earth resembles ‘the kingdoms of this world’ far more than ‘the kingdom of our God and the authority of his Christ’ (Revelation 12:10).
What is happening in society at large is also happening in all kinds of churches, from Roman Catholic to evangelical, but with far more serious consequences. And although the church’s holiness is only one of its attributes, the absence of this attribute perhaps conceals the church’s real identity more and thus exposes her to more dismissal and derision than the lack of any other.

Consideration of the church’s holiness is therefore pressingly relevant. Asking and answering two very similar questions may help us to appreciate this.
Can the church be worse than the world? If we think of the church as the ‘catholic or universal church, which is invisible, [which] consists of the whole number of the elect that have been, are, or shall be gathered into one, under Christ the head thereof’ (Westminster Confession of Faith, 25, 1), and if we think of the world as the realm of fallen mankind, then our answer to this question must be, ‘No’.
In these senses, the church and the world are not only different but antithetical to each other (Ephesians 1:21-23; James 4:4). God is for the church while the world is against him. He rules the church while Satan rules the world (Ephesians 2:1-2); and he is in the church while the world is ‘without’ him (Ephesians 2:12).
Such stark alternatives as these bespeak the profound and permanent distinctiveness — or holiness, in the sense of separateness (2 Corinthians 6:14 – 7:1) — that belongs to the church as the people of God.
We must answer this first question, then, with an unequivocal, ‘No!’ The church is never in a worse condition than the world. She has never been nor can she ever be. ‘God is in the midst of her; she shall not be moved’ (Psalm 46:5). Her Lord Jesus Christ so builds her that ‘the gates of hell will not prevail against [her]’ (Matthew 16:18).
The church is not of the world. In that sense she is — and will remain — holy.
Particular churches

Can a church be worse than the world?  This is a different question. In order to answer it, we need to remember that Scripture uses the word church in more than one way.
In addition to what it tells us about the church, as we have noted above, it also tells us how particular local churches actually came into being, as people of differing religions and nationalities believed the gospel, were baptised, and renounced the world’s ways (Acts 2:40-41; 8:12-17; 16:13-40).
These particular local churches are members of ‘the visible church … [which] consists of all those throughout the world that profess the true religion, together with their children … [which has] the ministry, oracles and ordinances of God’ (25, 2-3).
Particular local churches are therefore no less sacred than the one, catholic and apostolic body, of which they are not only parts but also manifestations. But they may not be as holy as they ought to be. Particular local churches can be ‘more or less pure’ (25, 4). This is the distinction that we are emphasising by means of the definite and indefinite articles in our two questions.
So we must think of particular churches as well as of the church, of each and every individual congregation together with the association or denomination to which those individual congregations formally belong.
In this sense, our second question is deliberately phrased in order to call to mind some words of the apostle Paul. Writing to the Corinthians, he reminded the Christians there of something that had happened among them that was unparalleled even in the decadent environment for which first-century Corinth was notorious.
He referred to immorality of ‘a kind that [did] not occur even among pagans’ (1 Corinthians 5:1). This shows that a church of which Christ is head and in which God’s Holy Spirit dwells can be worse than the world, at least in specific respects.
Tension

We are limited in terms of what we can do physically and mentally. For example, looking two ways at once is not something that we are able to do — and even thinking about two things at once can be beyond us!
So how can we, with our limitations and partialities, remember that the church is holy and yet deal with impurities in particular congregations and denominations?
Graciously but not surprisingly, God has not left us to puzzle this out on our own. This tension between the visible church with all of its impurities and the invisible church in all of her holiness is not outside the scope of his truth.
First Corinthians 5 deals with this very tension. There Paul informs the saints at Corinth both of how they ought to react when a church is not what it ought to be and also of what is to be done to maintain and manifest proper holiness.
Using the analogy of leaven as a symbol of sin and as a reminder of Israel’s bondage in Egypt (Exodus 12:8, 15 – 20), Paul says two things in verse 7: First, ‘you … are unleavened’; second, ‘Cleanse out the old leaven that you may be a new lump’.
Let us consider each of these things, beginning with the holiness of the church.

In eternity past, God chose a people for himself out of the sinful human race (Ephesians 1:3-4). He graciously set his love upon each of them, giving them to his Son so that Jesus might redeem them, by his obedient life offered up to God in an atoning death (John 17:9, 24; 2 Corinthians 5:18, 20-21; 1 John 4:9-10, 14).
By his obedient life and sacrificial death, Jesus Christ created one body (Ephesians 4:4) and one bride (Ephesians 5:25-32) of people from Old Testament Israel and the gentile nations (Ephesians 2:11-22) — ‘a great multitude that no one could number, from every nation, from all tribes and peoples and languages’ (Revelation 7:9); ‘one flock’ (John 10:16) and ‘one new man’ (Ephesians 2:15).
This one purpose of God is presented in both the Old and the New Testaments, but with slightly different emphases. In the Old Testament, the spotlight is on the larger entity of the theocratic nation, with passing notice given to the faithful remnant within it.
The New Testament focuses on particular churches, with reference made in passing (but in some detail) to the larger catholic whole. Drawing a straight line between the two testaments, we can see continuity between the Old Testament remnant and the new covenant church.
So, on the subject of the church, as on so much else, there is a real and deep harmony between Scripture’s two testaments.
Hywel R. Jones

To be concluded
This article first appeared in
Modern Reformation
(www.modernreformation.org)

A spotless bride – the holiness of the church (2)

Christ in the historical books of the Bible

Two letters in one 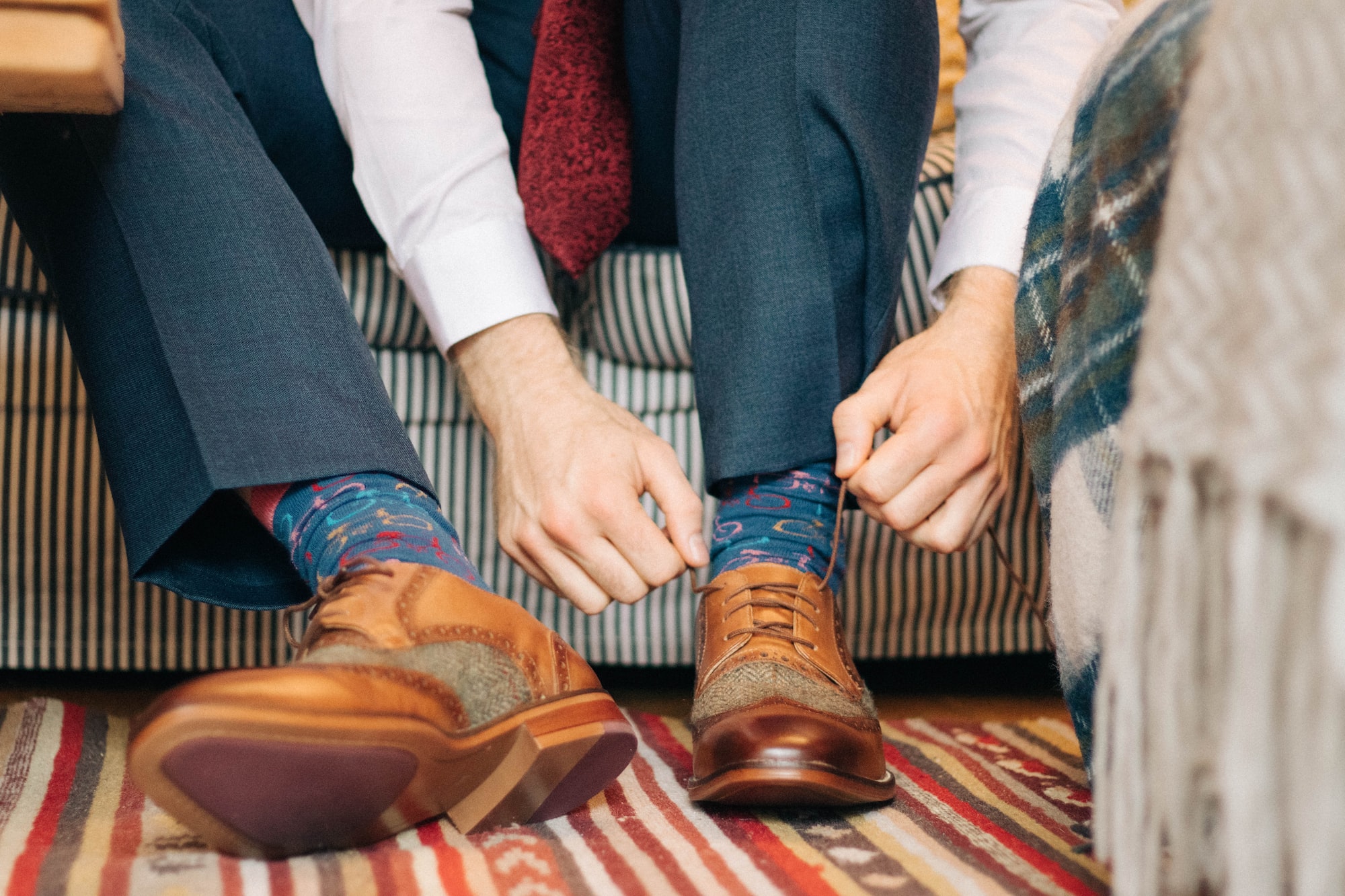 ‘He couldn’t lace his boots’