Alastair Noble Director of the Centre for Intelligent Design.

A fundamental question posed by our existence is whether we are here by chance or design. It crosses the minds of almost everyone from philosophers to football supporters at some point in their lives and often goes unanswered.

It is usually assumed that the question is purely a religious one, but it goes deeper than that. It certainly has religious undertones and can lead to faith, but more fundamentally it poses a question about how we got here and why we are here.

It is a question that arises in science also. Given the complexity and precision of the universe and of life, can we detect real design from beyond nature or is it all a huge and meaningless accident?

Surprisingly, the latter is more or less the scientific consensus. Neo-Darwinism is said to have given us the evidence that all of life is the result of random mutations and natural selection, although there is the embarrassing problem of having no explanation for the emergence of first life.

Cosmologists also have their own evolutionary hypothesis. The universe somehow emerged from nothing and continues to expand on a mind-numbing scale. Is that it all sorted then?

A closed door to the divine

It took me a while to realise that, in this matter, the biologists and the cosmologists are not really dealing in scientific facts, but rather on speculations imposed on them. Mind you, I should have seen that sooner, because several scientists have been honest enough to admit it.

The late Richard Lewontin, one-time Professor of Biology at Harvard, for example, could hardly be more explicit: ‘It is not that the methods and institutions of science somehow compel us to accept a material explanation of the phenomenal world, but, on the contrary, that we are forced by our a priori adherence to material causes to create an apparatus of investigation and a set of concepts that produce material explanations, no matter how counter-intuitive, no matter how mystifying to the uninitiated. Moreover, that materialism is absolute, for we cannot allow a divine foot in the door.’

Now at one level you have to admire that degree of honesty, but at another it is quite shocking. What he is saying is that scientific conclusions are not ultimately based on empirical evidence but on the philosophical assumption of ‘materialism’ or ‘naturalism’. It is not that the evidence points in the direction of atheism; it is that scientists want it to be that way and have assumed that it is the case.

The first time I encountered Intelligent Design (ID) in detail was at a lecture I attended in Cambridge in 2005. It was given by the Cambridge-trained American philosopher of science Dr Stephen Meyer. He was describing his work on DNA and in particular what conclusions can be drawn from its information content, carried in the coded sequences of its chemical constituents.

I had often marvelled at the chemical beauty of the DNA molecule with its double helical backbone and base pair units embedded within its structure. Indeed, as a chemistry teacher, I had introduced sixth form pupils to the structure of DNA as an example of chemical precision and of the painstaking work of the scientists who elucidated its chemical structure.

What I had never heard before, and what in retrospect is blindingly obvious, is that the order of the chemical units in DNA carries digitally coded genetic information. In solving one mystery – the chemical structure of DNA – its co-discoverers, Crick and Watson, had uncovered another. What is the origin of the information carried by DNA?

Meyer argued that it is entirely scientific to explore the origin of that information, and that it is well within the scientific method to make an inference to the best explanation for it. To do so it is necessary to draw on our knowledge of processes currently in operation which are known to produce the result observed.

In all our experience, functional information, such as is found in print, film, or computer software, arises only from the activity of an intelligent mind. Hence, the best explanation for the origin of the information carried in DNA is that it is the product of something akin to mind or intelligence.

The sophistication of DNA’s information is never going to arise randomly or by chance, any more than intelligible newsprint could be produced by simply splattering ink on enough paper. As Henry Quastler, the pioneering information theorist, once observed, ‘information habitually arises from conscious activity’.

My openness to Meyer’s exposition of evidence for design in DNA was, in part, conditioned by an earlier lecture I had attended in Glasgow in 2004, given by Prof. Phillip Johnson, former law clerk to the Chief Justice of the US Supreme Court and Law Professor at the University of California in Berkeley.

He described how, on a year’s sabbatical in London in 1988, he encountered in the same bookstore two books about evolution: Richard Dawkins’s The Blind Watchmaker and Michael Denton’s Evolution: A Theory in Crisis.

He was intrigued that evolution could be the subject of such diametrically opposed treatments, and spent a good part of his year examining the subject closely. From a position of unquestioning acceptance of Darwinian evolution, he came to the conclusion that the evidence for it was not credible. He describes his findings in his book Darwin on Trial. 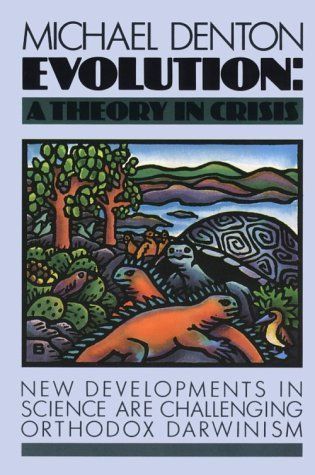 This was the first time I had heard such a devastating yet non-religious critique of evolution. Johnson explained that evolution, as popularly understood, is sustained primarily not by the scientific evidence, but by a prior commitment to the philosophy of naturalism.

Although I had been a science student, researcher, and teacher for 40 years, I had never appreciated that, in the area of origins, science is not neutral, but is underpinned by a philosophical commitment which rules out the existence of any agency beyond nature.

It is intriguing to note that scientists like Richard Dawkins assert the absolute certainty of evolution and at the same time say that no one has any idea about how life arose. Indeed, in an interesting interview with the American commentator Ben Stein in the DVD Expelled, he agrees that the biochemistry of life could be interpreted as showing evidence of a higher designing intelligence, arguing also that life may have been seeded on this planet from elsewhere.

He is in good company here, as one of the co-discoverers of the chemical structure of DNA, Sir Francis Crick, also proposed this solution, known technically as ‘panspermia’.

Lord Rees, the Astronomer Royal, on the other hand, offers the singularly unscientific explanation of the origin of life by suggesting it could be a once-in-a-universe ‘fluke’.

The absence of any credible explanation for the origin of life is a major problem for modern biology and calls into question the whole evolutionary framework. Until we know what factors were at work in life’s origin, we cannot assert with any confidence the nature of the processes by which life has developed. But the fact that scientists cannot contemplate what is staring them in the face – namely that life is run by immaterial information coded onto the chemistry of DNA and pointing to a designing intelligence – underlines the suffocating dominance of the philosophy of naturalism.

The obvious conclusion cannot be drawn because the philosophical rule of science can’t be violated. This clearly represents a breath-taking level of intellectual arrogance unworthy of true scientific investigation.

Over the years I have not heard any credible rebuttal of Meyer’s argument about the evidence for intelligent design in DNA’s information content. I’ve heard plenty of ad-hominem abuse and uninformed dismissal, and the pathetically weak assertion that given time a naturalistic explanation will be worked out.

What scientists should do is accept the inference to the best explanation until something better is found. I doubt, though, if a better explanation for the origin of the information content of DNA will be found than that proposed by Dr Meyer.

The information content of DNA is, of course, not the only evidence for design in nature. Support for the design hypothesis is in fact widespread and comes from cosmology, biology, and, to some extent, psychology. The most common arguments are from what has become known as ‘cosmic fine tuning’ and biological complexity.

It is encouraging that a small but increasing number of scientists are beginning to recognise the severe limitations of Darwinian theory and, although not yet ready to embrace Intelligent Design, recognise the need for a much better theory of origins which takes account of the clear evidence of design in nature.

The writer of Genesis was not a scientist in any recognisable sense, but he certainly got it right when he wrote, ‘In the beginning God created the heavens and the earth’ (Genesis 1:1).

Dr Alastair Noble is Director of the Centre for Intelligent Design.

The verse that helped me become a more patient parent