When Augustine arrived in England, the land was not under unitary authority. It was a federation of small kingdoms. It will thus be helpful to begin with a brief outline of English political geography at that time. Seven kingdoms are worth noting.

1. Kent consisted of the modern county plus the south-eastern part of Greater London. Its capital was Canterbury.

2. Essex, the kingdom of the East Saxons, included the area still known by that name, along with all of Greater London north of the Thames, much of Hertfordshire, and part of Buckinghamshire. Its capital was London.

3. East Anglia embraced most of Suffolk and Norfolk. Its capital was Dunwich, now a mere hamlet. When the kingdom of the East Angles was in its prime, Dunwich was a thriving seaport. Coastal erosion accounts for its decline.

4. Sussex (the South Saxon kingdom) included the modern county as well as Surrey and south-west London. Little is known of the early history of Sussex. Its first capital was probably Selsey.

5. The kingdom of Wessex (the West Saxons) covered Hampshire, Wiltshire, Dorset and Somerset. Winchester was the capital city.

6. The largest of the Anglo-Saxon kingdoms was Mercia. It stretched from the Cambridgeshire fens to the Welsh border, and from the Thames to the estuaries of the Humber and the Mersey. The capital was Tamworth.

7. The most northerly kingdom was Northumbria. This included all the land to the north of the Humber and the east of the Pennines, stretching as far north as the River Forth near Edinburgh. Bamburgh was the capital.

Before long Augustine and his colleagues began to see fruit for their labours in Kent. Within the year King Ethelbert professed faith and was baptised.

Writing to a fellow bishop, Gregory showed immense pleasure at this early success. He recounted how at Christmas 597 ‘more than ten thousand Angles are reported to have been baptised’.

Augustine was consecrated Bishop of the English. When further bishops were appointed, he was elevated to the position of Archbishop.

By now Augustine was aware of the indigenous British Church. He wrote asking Gregory what his relations with the British pastors should be. Gregory’s reply was ominous for the future development of Christianity in these islands: 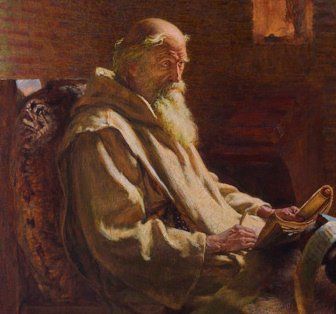 ‘All the pastors of Britain, we commit to your charge. Use your authority to instruct the unlearned, to strengthen the weak, and correct the misguided.’

In translating this reply, Bede uses the word ‘bishops’. I have replaced it with ‘pastors’ to emphasise the fact that the British Church was not at that time, as far as we can tell, organised episcopally.

Only with the consecration of Augustine did Roman-style episcopacy come to this country. In Gregory’s words we have the first clear claim by the Roman Church to supremacy over the long-established churches of the British Isles.

There begins to be a second thrust to Augustine’s mission. Not only is he to convert the English to Christianity, he is also to attempt a Roman take-over of the British Church.

In 603 Augustine summoned the British pastors to a conference near Gloucester. The British Church observed Easter at a different time from the Catholic Church, and had other customs at variance with those of Rome.

Augustine wanted to persuade the British pastors to fall into line with Rome on two issues: the date of Easter and the method of baptism. If they would agree to this, other divergent customs would be tolerated (at least for the time being).

The British pastors declined to agree without first consulting their own people. A second conference was therefore arranged.

Before attending, the representatives of the Britons asked a man whose wisdom they respected, how they could know whether Augustine was a man of God. The advice was that a man of God would demonstrate humility by rising to greet the British representatives.

Augustine failed to do this. Inevitably, the conference reached no agreement.

The following year Augustine sent Mellitus to Essex whose king, Sabert, was a nephew of Ethelbert’s. Sabert led his province in receiving the Roman Catholic faith, and Mellitus was appointed Bishop of
London.

Later in 604 Augustine died. His successor as Archbishop of Canterbury was called Laurence. He continued with the policy of trying to bring the original inhabitants of Britain under the wing of Canterbury and Rome, and also extended this outreach to include the Irish. He failed as completely as had Augustine.

The progress of the Roman version of Christianity was certainly not smooth and uninterrupted. The deaths of the kings Ethelbert and Sabert resulted in both Kent and Essex reverting to paganism. Mellitus was banished from Britain.

Laurence was on the point of leaving when, according to Bede, he had a dream in which Peter rebuked him for planning to abandon his flock and commanded him to stay.

Laurence therefore sought an audience with Eadbald, the new king of Kent, and succeeded in leading him to accept the Christian faith. When Laurence died in 619, Mellitus returned as Archbishop.

Throughout the seventh century paganism and Christianity vied for dominance. Several kingdoms vacillated between the two.

Under King Earpwald, East Anglia abandoned idolatry and received the Christian faith around 630. However, for three years after Earpwald’s death this kingdom was ruled by a pagan. It reverted to Christianity under King Sigbert.

Christianity first came to the Anglo-Saxon kingdom of Northumbria in 625. The king at the time was Edwin. He sought the hand of Eadbald’s sister, Ethelberga, in marriage.

Initially, Eadbald refused the request on the grounds that Edwin was not a Christian. Edwin assured Eadbald that Ethelberga would be allowed freedom to worship according to her convictions, and that he himself would be willing to convert to the new faith if his advisers judged that it was more acceptable than their present religion.

The marriage was therefore agreed, and a Roman missionary named Paulinus came to Northumbria as the queen’s chaplain. He was keen to convert the Northumbrians, but his preaching met with no response.

In 626 Wessex attacked Northumbria. Edwin promised that he would turn to Christ if he were granted victory. He advanced against Wessex, and returned home victorious.

Immediately he began receiving instruction in the faith. He continued to hesitate for a year until he summoned a counsel of his wise men.

The king’s chief adviser was a man called Coifi. He pointed out that their present pagan religion was valueless, since the gods did not always favour the good. He also noted that the new religion was more definite about the life to come.

Coifi met with Paulinus, after which he advised the king to burn the idol temples to the ground and turn to Christ. Edwin and his noblemen were baptised in York on Easter Day. In the course of the rest of the year many people were baptised.

Edwin died in battle at Hatfield, near Doncaster, in 633. The decision of a king did not change the hearts of his people. The Northumbrians had had the destruction of their old religion forced upon them. But they were still hostile to Christianity.

On one occasion a crowd mocked from the bank of the River Tyne as some monks ran into difficulty in a small boat, and were in danger of being washed out to sea.

The kingdom of Northumbria degenerated into anarchy and apostatised from Christianity. Paulinus and Ethelberga returned to Kent.

The following year, however, Edwin’s nephew Oswald came to the throne. He began the process of restoring Northumbria to both political stability and the Christian faith.

Oswald had spent 17 years in exile in Scotland. His father, Ethelfrid, had been king of Northumbria. When he died in 617, Oswald was rightful heir, but Edwin, Ethelfrid’s brother, had seized the throne.

While in Scotland, Oswald had spent time on Iona and had been taught the British Christian customs and teachings. Seeing the religious chaos which prevailed in his new kingdom, he sent to Iona for missionaries.

After a first unsuccessful mission, a second attempt was made under the leadership of Aidan. He established his base on the island of Lindisfarne, now known as ‘Holy Island’, just off the coast of Northumberland near Beal.

Aidan had a fine reputation as a godly man. Even Bede, though staunchly partisan in favour of Roman Christianity, acknowledges Aidan’s qualities: ‘Among other evidences of holy life, he gave his clergy an inspiring example of self-discipline and continence, and the highest recommendation of his teaching to all was that he and his followers lived as they taught’.

In the seventh century the indigenous Britons and the Anglo-Saxon settlers spoke different languages. Until Aidan had learnt English he preached through King Oswald as interpreter.

Northumbria became a Christian kingdom. Its Christianity was different from that which Augustine had introduced further south, and which Paulinus had unsuccessfully tried to instil in the north.

Thus north-east England was successfully evangelised, but from Iona, not from Rome.

Veiled in Flesh – The Incarnation: What It Means and Why It Matters

Journal of the Seminary of the Free Church of Scotland (Continuing), Volume 4.

The Synod of Dort

Theology Made Practical: New Studies on John Calvin and His Legacy

Particular Redemption: The End and Design of the Death of Christ

The impact of A. W. Pink