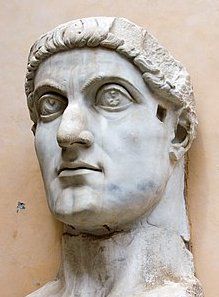 Fathers of the Early Church – Part 1 – Why should we take notice?

Fathers of the Early Church – Part 2 – The letter of Diognetus

Eusebius was one of those men who had the ability to write a phenomenal amount. He is best known as the first person to write a history of the church up to his own day. But that is only one of three historical works which he produced. In addition, he wrote seven works of apologetics, seven Bible commentaries, two theological works, many published sermons, addresses and letters, as well as two books about Constantine.

Constantine was the first Roman Emperor to embrace Christianity. Whether he was genuinely converted is debatable, but Constantine made Christianity the official religion of the Empire. This resulted in a major change in the church’s position. From being the target of periodic persecution, it suddenly found itself at the forefront of imperial life.

Eusebius (A.D. 263 to about A.D. 340) lived right through this time of readjustment. The conclusion he reached was that the conversion of Constantine (the reality of which he did not doubt) was the dawn of the end of the world. He seemed to think that a Christian on the throne of the Empire meant that the millennium had begun. As a result he writes about Constantine with a hero worship which is so idealised as to be scarcely credible. Let me introduce you to one of Eusebius’ books about the Emperor.

In praise of Constantine

The book is titled Oration in praise of Constantine, and Eusebius wrote it to celebrate the thirtieth anniversary of Constantine’s accession to the throne. It falls into two parts.

Part one sets out to sound the royal praises. The argument is that Constantine’s earthly reign is an image of the higher kingdom. For Eusebius, sovereign power is the defining feature of God, and it is through his Word that God exercises dominion over the whole world. In Eusebius’ view, Constantine was the contemporary earthly reflection of the heavenly Word.

The chief way in which the Roman government was shaped according to the heavenly blueprint has to do with the unity of the Empire and rule by a monarch. Prior to the fourth century it had been customary for the Empire to be divided between two rulers, but Constantine centralised power in his own hands.

In part, this was the continuation of the policy of his pagan predecessor, Diocletian. But Constantine certainly went about to complete the work which Diocletian had begun, and did so ruthlessly. Eusebius puts a theological construction on this political development: ‘Monarchy is far superior to any other constitution or form of government, for the alternative, that equality of privilege in which many share power, is far too much a recipe for anarchy and division. That is why there is one God, and not two, or three, or more’.

Before Constantine, paganism with its many gods had been the official religion of the Empire. Eusebius saw the shift in State sympathy, from paganism to the church, as providential. The unity of the Empire provided opportunity for the knowledge of the one true God to diffuse throughout its realm. Victory over spiritual demons, and the suppression of political enemies, went hand-in-hand. The religion of the one true God was the justification for imperial unity.

It is obvious that a concern for unity in the Empire was Constantine’s guiding light. In his understanding, to achieve this goal required religious uniformity. This meant that Christian nonconformity was as unwelcome as any dissident religion.

Constantine’s role in the Arian controversy demonstrates his approach. The Arians denied the full deity of Christ, but the Council of Nicaea, in which Constantine participated, made it clear that the Arians were wrong. We get the impression, however, that as far as Constantine was concerned, any creed would do, just so long as everyone would agree to it! To the Emperor, unity was more important than truth. We can be very thankful that, in the mercy of God, the truth did prevail.

In part two of the Oration, Eusebius interprets the principles underlying the reign of the Christian Emperor. He outlines his theory of salvation, which is decidedly unbiblical. He starts from the assumption that the supreme God is unapproachable by the lower creation, and portrays the Word in the following way. ‘The Word stands in the middle, leading created being to the uncreated, as an undisrupted bond between the two, binding together things greatly separated, and not permitting them to fall apart’.

Eusebius then goes on to describe what he calls the Word’s ‘bodiless brush with a body’. This description of the humanity of Christ sounds decidedly like the Docetism which Ignatius opposed. The causes of Christ’s death and resurrection are, according to Eusebius, threefold. (1) He rose from death to prove to his disciples that death is nothing; (2) He rose to manifest his divine power; (3) His death was an offering for the sin of the human race. As far as Eusebius is concerned, the worst sins are belief in many gods, and social division.

Eusebius found the resurrection of Christ more significant than his passion. The cross had become a sign of conquest, initially over death, and then, by derivation, over political enemies.

The results of the resurrection, however, were that the energy of the evil spirits was destroyed; the unity of God was proclaimed; the one universal Empire arose; power was invested in a single monarch; and peace reigned. In Eusebius’ own words: ‘And so, at one and the same time, at the command of one and the same God, there sprang up for the blessing of mankind two plants, the one the Roman rule, and the other the teaching of godliness’.

We might perhaps be forgiven for thinking that the order in which Eusebius mentions these two means of blessing is an indication of his priorities! Clearly, Eusebius’ views are poles apart from biblical truth. Nevertheless, there is value in reading his work. It is good to be warned of the dangers into which it is possible to fall. Three pitfalls are obvious.

In the first place, there is the danger of identifying Christianity with some particular political viewpoint. Eusebius failed to distinguish between the earthly kingdoms of this world, and the heavenly kingdom which, as Jesus said, ‘is not of this world’ (John 18:36).

Those who espouse liberation theology, for example, have fallen into this trap. So have those who make the ‘establishment’ of a particular denomination a matter of principle. So has anyone who assumes that every true Christian must vote for the same party, and that you can’t be a genuine Christian and support the other side.

At a lesser level, there are churches and Christian organisations which have become sidetracked from the priority task of evangelism through involvement in social and political issues.

A second danger evident in Eusebius’ writings is a willingness to compromise truth for the sake of unity. Constantine would happily have endorsed an Arian creed if he could have secured the unity of the Empire by doing so. In our century we have seen much of this careless drive for unity, with the growth of the ecumenical movement. Often, it seems, those who champion the ecumenical cause forget that true love for one another can only come on the back of obedience to the truth (see 1 Peter 1:22).

Thirdly, Eusebius illustrates the danger of allowing the resurrection of our Lord to displace his Passion from our thinking. In Eusebius’ theology, Christ’s death as an offering for sin comes across as something of an afterthought. What really mattered to him was the mistaken idea that the resurrection conferred upon the cross the character of a political conquest. It was such an outlook which, some centuries later, led to the bloody crusades.

We see something of this same imbalance whenever a church or a movement becomes triumphalistic and begins to preach health, wealth and happiness as part of its gospel. May God enable us to hold true to the spirit of Saint Paul, who said: ‘God forbid that I should glory except in the cross of our Lord Jesus Christ’(Galatians 6:14).

The fourth article in this series is here: Fathers of the Early Church – Part 4 – Two issues for today

Veiled in Flesh – The Incarnation: What It Means and Why It Matters

Journal of the Seminary of the Free Church of Scotland (Continuing), Volume 4.

The Synod of Dort

Theology Made Practical: New Studies on John Calvin and His Legacy

Particular Redemption: The End and Design of the Death of Christ

Why did this happen to me?