Oliver Cromwell – Defender of the Faith

Robert Oliver In 1971 Robert commenced a pastorate at the Old Baptist Chapel, Bradford on Avon, Wiltshire. This continued until retirement in 2006. During this pastorate he completed a research course leading to a

This year, the four hundredth anniversary of the birth of Oliver Cromwell, has occasioned many articles in the secular and the religious press. Britain’s only experience of republican government, under Oliver Cromwell, has inevitably attracted the attention of political writers.

The experiment did not last long. Political uncertainty after the death of Cromwell led to the restoration of the Stuart monarchy under Charles II. Reaction was swift and bitter. Cromwell’s remains were desecrated and his memory vilified. It was not until the nineteenth century that a serious reappraisal began.

Thomas Macaulay pointed the way, but the change gathered momentum with the publication of Thomas Carlyle’s massive Letters and Speeches of Oliver Cromwell, recently described by Christopher Hill as an epoch-making book. Important materials for an assessment of Cromwell were at last readily available.

Factors other than his own words have, of course, had to be taken into account. The verdicts on Cromwell have varied tremendously. Nineteenth-century liberals claimed him as their political ancestor. John Buchan presented him as a military genius. Christopher Hill entitled his biography God’s Englishman. Antonia Fraser, a Roman Catholic, borrowed from John Milton and wrote Cromwell, Our Chief of Men. An earlier vitriolic piece by Hilaire Belloc reminded us that the old animosity was not dead.

It is now generally accepted that Cromwell was not an unprincipled rogue. But was he a Christian and, if so, what sort of a Christian? One expects writers who have little sympathy with Puritanism to be confused. But one finds confusion among Evangelicals as well. 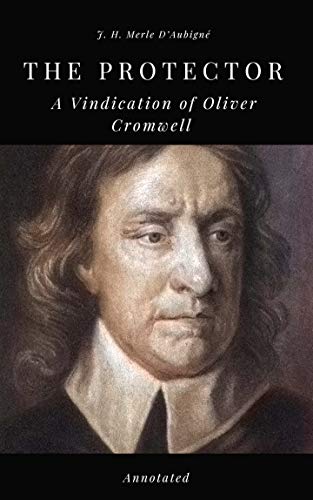 “The Protector: A vindication of Oliver Cromwell”

The republication by Sprinkle Publications (Virginia, USA) of The Protector: a vindication is important for the way in which it helps the reader come to some conclusion himself. First published in 1847, D’Aubigné’s work has a unique place in the Cromwell literature.

Before turning to Cromwell, D’Aubigné had begun to publish his work on the English Reformation. His studies convinced him that, in the providence of God, Britain was called to leadership in the Protestant world. By the nineteenth century the well-being of world Protestantism did not often reflect the wishes of the ruling classes in Britain. Nevertheless, in spite of the policies of governments, the nation played a significant role in the defence and proclamation of the gospel in Europe, America and ultimately the five continents.

The events of the seventeenth century were fundamental to this role. The Reformation heritage was weakened under the first two Stuarts but, in the mercy of God, it was reasserted amidst the conflicts of the middle years of the century. Central to that process was Oliver Cromwell. Although for a quarter of a century after Cromwell’s death the cause of the gospel was again under threat, the Christianity which had flourished during the interregnum survived.

As D’Aubigné wrote, he saw the English Protestant heritage once more being challenged, this time by the erosions of the Tractarian Movement. Under new influences, the long-standing English hostility to Romanism appeared to be waning. The publication of Carlyle’s work was opportune, and D’Aubigné set about writing a review, accompanied by a selection of Cromwell’s letters.

As he worked, the review extended beyond even nineteenth-century lengths and he became increasingly impressed with Cromwell who ‘during the season of his power was really the Protector of European, and in particular of French Protestantism’ (p.21). D’Aubigné, who was of Huguenot stock, was profoundly moved by his researches. He was also inspired to recall his English readers to an appreciation of their heritage.

The soul of history

D’Aubigné was a meticulous researcher, probing, comparing and checking his data. Like Carlyle, he was fascinated by the great men of history, and both authors were at times in danger of overlooking the power and significance of grass-roots movements led by historical nonentities. Perhaps today, however, the pendulum has swung too far in the opposite direction. The big figures of the past demand renewed attention.

D’Aubigné’s approach focused on an element seldom considered today. He wanted to lay bare what he called ‘the soul of history’. This involved the study of God’s direct involvement and the response of the human soul to this.

Cromwell’s letters and speeches provided him with abundant material. The resulting book is not strictly a biography. Rather it is a study of Cromwell’s religion set in a biographical framework. For a detailed account of Cromwell’s life, one has to turn to one of the modern biographies. If, on the other hand, you want to get close to Cromwell the Christian, this is the book for you.

Here we have Cromwell’s testimony: ‘Oh, I lived in and loved darkness and hated light; I was a chief, the chief of sinners. That is true: I hated godliness, yet God had mercy on me. O the riches of his mercy! Praise him for me; — pray for me, that he who hath begun a good work would perfect it in the day of Christ’ (p.25).

Cromwell’s concern for religious liberty is well known. Perhaps less appreciated today is his conviction that righteousness exalts a nation. D’Aubigné saw these themes as interrelated, and devoted two chapters to them.

D’Aubigné’s treatment of Cromwell is not uncritical. He argues that ‘his great religious error was his assuming for the mainspring of his actions those inward impulses which he ascribed to God in preference to the explicit commands of Holy Scriptures’ (p.92). He challenges Cromwell’s ‘enthusiasm’ or ‘mysticism’ at various points in his career, but especially in connection with the events which led to the execution of Charles I.

In this connection he wrote, ‘This error in Cromwell is, in our opinion, the only important blemish to be found in Cromwell. At the same time it is the key which opens his whole life. His piety was sincere, but it was not always sober. Yet if this error be a great extenuation of the Protector’s fault, the crime to which it led him must ever remain, in history, as a warning to those who may base their conduct on their inward impressions, rather than on the sure, positive, and ever-accessible inspirations of that Word of God which never deceives’ (p. 93).

Over against this tendency to lay too heavy a stress on inward impressions in matters of guidance, D’Aubigné points out that in counselling his daughter who lacked assurance of salvation, Cromwell directed her to the great objective truths of the gospel (p.178).

Christopher Hill called his biography of Cromwell, God’s Englishman. D’Aubigné, a Continental historian, saw him as a great European figure. This appreciation has been sculptured into the Reformation Monument in Geneva, where Cromwell is the only English figure to appear.

It may be difficult to substantiate D’Aubigné’s claim that Cromwell ‘was the greatest Protestant to have lived since the days of Calvin and Luther’ (p. 229), but his place in European Christianity should not be forgotten. D’Aubigné developed an interesting contrast between Cromwell and Napoleon. ‘Neither was satisfied with his own country alone, and both exerted their activity abroad. But while Napoleon bore to other nations French tyranny and indifference, Cromwell would have given them religious liberty and the gospel’ (p. 231).

He admits that Cromwell did not succeed, but claims that ‘more than any sovereign of England he deserved the glorious title of Defender of the Faith’ (p. 229). That claim is surely no exaggeration.

The Protector: a vindication is published by Sprinkle Publications, Harrisonburg, Virginia, USA (281 pages).

Share:
Robert Oliver
In 1971 Robert commenced a pastorate at the Old Baptist Chapel, Bradford on Avon, Wiltshire. This continued until retirement in 2006. During this pastorate he completed a research course leading to a
18
Articles View All
Articles Historical 09 (September 1999) 1999 Oliver Cromwell Robert Oliver

Brownlow North: His life and work

The Spirit of the Age: The 19th Century Debate Over the Holy Spirit and the Westminster Confession

With Mercy and with Judgement

A great blessing to me — John Newton encounters George Whitefield

The five points of Calvinism